Kier Group's shares took a nosedive on Friday afternoon, after the company announced a £250m rights issue intended to pay down its debt. The background to this, according to Kier Group, is a mixture of lenders pulling back from the construction sector, more scrutiny of debt levels by potential customers and pressure to reduce payment times to suppliers.

Some of the comments in the coverage from Friday are toe-curling. For example, here's a snippet from the FT:


Alastair Stewart, an analyst at Stockdale Securities, said: “This was clearly an emergency rescue rights issue, required by some of their lenders at breakneck speed. A few years ago Kier were seen by the industry including rivals as probably the most conservative, solid company in the sector. Now it looks like the banks have given them a month to save themselves.”

Kier Group is one of the most heavily shorted UK stocks. According the FCA's list of disclosed short positions (which only lists 0.5%+ positions) total shorts at that level and above are almost 14%. That is the largest total short position in the list, and given that there are likely to be other shorts out there below 0.5% the real total could be a few points higher. (I think I can see about another 2%)

Here's a chart nicked from ShortTracker showing how FCA disclosed short positions in Kier Group have changed over time. Obviously negative sentiment has been on the rise throughout 2018.

Who is behind it? Below is a list of the firms reported by the FCA as currently shorting Kier Group. Note that Marshall Wace actually has two short positions held by different bits of the firm, totalling 4%.

After that the next biggest short is BlackRock, with 2.44%. BlackRock also has a long position. According to the most recent annual report, this stood at 5.9% as at 19th September. So as well as having the second largest short position in Kier Group, it also has (or had) the third largest long position. 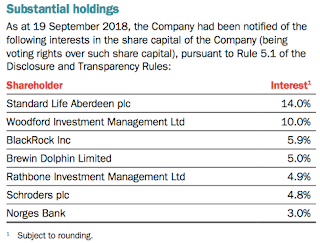 And another notable player in the Kier Group shorts list is Naya Capital. This firm gave the Tories £100k in the run-up to last year's general election. So another public sector contractor being shorted by a firm that funds the party in power.

If any of this sounds familiar, that's because there are a lot of similarities with Carillion. The same firms shorting, and similar links. Let's hope the company has a rather better outcome.

Back on the long side, Woodford and Aberdeen Standard have very big positions (14%ish and 13%ish respectively according to CapitalIQ). In the latter case there is a decent chunk of UK pension fund money in the mix. Looking further down the share register, it is notable that the BAE pension scheme is also heavily exposed with 2% (one of a number of large positions they hold in UK companies that I have come across).

Coincidentally Kier Group just held its AGM. On the ballot were two resolutions seeking authority to disapply pre-emption rights. Not uncommon, but a bit more meaningful now. Both passed with spanking majorities. I can only see a couple of disclosed investor votes on the AGM so far - NBIM and BMO - and no oppose votes on either. But they aren't major holders anyway, NBIM having cut its position right back. 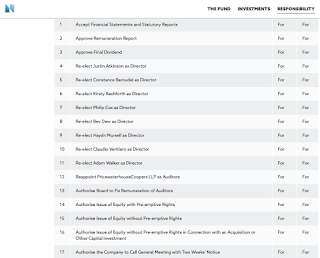 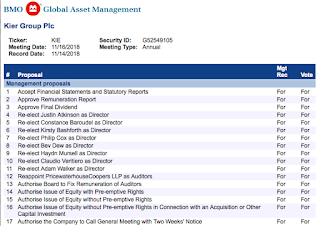 Finally, in case you were wondering, the total disclosed short position in Interserve on the FCA list stand at 6.4%. We might expect to see that creep up as concerns about the sector spread.
Posted by Tom Powdrill at 10:26