Clearly there are areas where the Covid-19 shutdown is going to have a bigger impact than others.

I won't bother rehashing stories about what's happening to retailers etc. but there are a few things that I think are worth clocking from the past week. The PRA letter to UK banks may actually have been a bigger deal than first thought. The FT reports that the banks were set to ignore its requests to exercise restraint on dividends and buybacks (on the latter Standard Chartered was still going right up till the end of March). I found this the most interesting bit:


Mr Woods’ intention was for the banks to make the announcement without public direction from the BoE, but leaders at four of the five lenders balked at the plan, the people said. RBS, which is majority owned by the taxpayer, was the only one willing to comply. “We all had exactly the same view,” said an executive at one of the four refusenik banks. “Just being asked to do it was not enough. We would have chosen to go ahead in paying the dividend and told the [BoE], ‘thanks very much for your input but we disagree’.” Another person briefed on the talks said: “Making the BoE force our hands was the only way of protecting ourselves from a shareholder revolt. If we had done it of our own volition then we would have faced legal challenges.”

Follow the direction of travel, and the PRA has also written out to insurers asking them to think of doing likewise:


When UK insurers’ boards are considering any distributions to shareholders or making decisions on variable remuneration, we expect them to pay close attention to the need to protect policyholders and maintain safety and soundness, and in so doing to ensure that their firm can play its full part in supporting the real economy throughout the economic disruption arising from Covid-19.

EIOPA urges that at the current juncture (re)insurers temporarily suspend all discretionary dividend distributions and share buy backs aimed at remunerating shareholders. This suspension should be reviewed as the financial and economic impact of the COVID-19 starts to become clearer.Taking into account the need to preserve an efficient and prudent allocation of capital within insurance groups and the proper functioning of the Single Market, EIOPA urges that this prudent approach is applied by all (re)insurance groups at the consolidated level and also regarding significant intra-group dividend distributions or similar transactions, whenever these may materially influence the solvency or liquidity position of the group or of one of the undertakings involved. The materiality of this impact should be monitored jointly by the group and solo supervisors.This prudent approach should also be applicable to the variable remuneration policies. It is expected that (re)insurers review their current remuneration policies, practices and rewards and ensure that they reflect prudent capital planning and are consistent with, and reflective of, the current economic situation. In such context, the variable part of remuneration policies should be set at a conservative level and should be considered for postponement.(Re)insurers that consider themselves legally required to pay-out dividends or large amounts of variable remuneration should explain the underlying reasons to their National Competent Authority.

From initial signals it looks like UK insurers may conclude that they do not need to change their approach. Legal & General issued an RNS statement on Friday afternoon confirming its intention to pay a dividend:


The Board of Legal & General plc has given careful consideration to the PRA's letter of 31 March.
The Board continues to pay close attention to the need to protect its customers and employees at this difficult time. The Board has carefully considered the need to act prudently in maintaining safety and soundness, and in so doing ensure that Legal & General plays its full part in supporting the real economy. It also recognises the importance of dividend income to many institutional and retail shareholders, particularly in the current environment.

As things stand this is fair enough, the PRA has asked insurers to consider their approach, L&G says it has and intends to go ahead with dividends. It will inevitably, however, carry another message given that the company's asset management arm is one of the biggest investors in UK companies.

What's interesting is that both banks and insurers have nodded to the interests of shareholders as a reason to carry on despite regulatory flags. In the case of the banks this has resulted in them being overruled by regulators, essentially cancelling shareholder primacy for the time being. What happens next with the insurers is unclear, especially give EIOPA's intervention.

This issue might even spread to asset managers. Amundi has already proposed suspending its 2019 dividend with DWS apparently likely to follow suit. Both are owned by European banks, which might explain it. But then a number of asset managers are owned by insurance companies too. There may be a bit of a domino effect here. And if investors start pulling their own dividends and buybacks, the pressure for investee companies to do likewise increases. Equity income funds beware!

Finally, worth also watching what is going on with utilities. Here's an interesting bit from the Sunday Times: 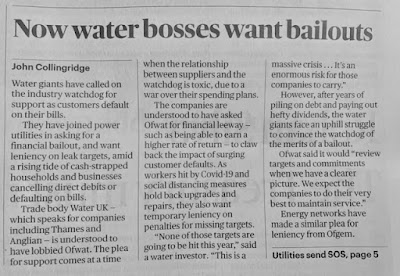 A second story in the paper looks at similar requests for leniency from energy companies, with one saying that: "Underlying it is a fact of the modern energy market: margins are wafer-thin."

This talk of wafer-thin margins reminds me of train operating companies. I remember the CEO of National Express explaining this is why they pulled out of UK rail - they just couldn't compete with state-owned (or partially owned) operators.

There's obviously a very delicate balance between trying to avoid monopoly rents and having private operators involved. It feels like an especially tough sell that this is a good model if it needs bailing out by the state when there is trouble ('trouble' a bit of an understatement here in current circumstances...) There is potential for there to be some big shifts in policy here.

(PS. To make a brief political point, there has been a lot of discussion of the merits of Labour being committed to public ownership of utilities. There is a small (basically Blairite) bit of the party that seems to dislike public ownership per se, but a more common tactical argument is that it might be poor prioritisation a) it's a lot of money b) is that really where you want to spend it and c) will the voters think you for it. But *if* utilities need bailing out during this crisis, it might be the Conservatives who end up paying the price (both financial and political) for any extension of public ownership. In this instance tactical arguments against melt away, and I can't imagine anyone Left of the Conservatives arguing for rapid re-privatisation. These are just a few sketchy thoughts that I'll try and develop a bit.)
Posted by Tom Powdrill at 14:25 No comments: