Corporate control on the cheap?

A couple of years ago, I got into the guts of the Melrose Industries hostile takeover of GKN. This deal squeaked through, despite it being opposed by GKN employees.

The bit of it that particularly interested me was the role of hedge funds doing the merger arbitrage trade, which ended up influencing a major part of GKN's shares (and simultaneously shorting Melrose). I say 'influencing' as the overwhelming majority of the funds' exposure to GKN was through derivatives, rather than ownership of its shares.

My understanding of how this corner world works is that hedge funds utilise equity derivatives primarily because they are cheap. It costs a lot of money to buy 1% of a PLC, and if a hedge fund with a few billion under management went out and bought the shares it would represent both a big expenditure and a very significant position. So using CFDs or swaps enables them to gain exposure to movement in the target's shares without having to pay to own the underlying asset. They obviously pay for the derivative itself, but that's a fraction of the cost of the underlying equity.

As I blogged previously about GKN, my understanding is that, as the counter parties to the derivatives, investment banks end up holding shares. Again, no problem in principle, and everyone is clear that it is the hedge funds which have the economic interest in the shares even if they don't own them. If the hedge funds have long derivatives they make money if the shares go up and lose it if they go down. That in turn means that if the bid fails they lose money, so holders of long derivatives obviously want the bid to succeed (or look to be set to do so - if they got in early they could take profits before the outcome is decided I suppose).

So far so simple. But what if you're an investment bank that holds the shares as a counterparty to a derivative holder? You do hold the shares, but only because of the derivatives. How do you decide how to respond? Pure survival instinct is surely going to tip you to support the bid because you know that your valuable hedge fund client is going to lose money if the bid looks like it might fail. It is possible, even, that the derivative is written in a way that stipulates this, though I simply do not know if this is the case or not.

My issue is that this may mean that de facto those holding derivatives are able to exercise influence on the outcome of bid equivalent to that of an investor holding equity. If so this is influencing what we used to call the market for corporate control on the cheap. It doesn't feel right to me that investors whose only interest is in an instrument that mirrors the share price, and its appreciation during the limited timeframe of the process a bid, should be able to influence the ownership of major employers.
I could be off-target on some of this so would welcome any corrections etc from anyone who knows this area better than I do. I will keep private just email if you don't want to comment on here. (I'd also be interested to find out how much gaining an exposure of say 1% via derivatives actually costs vs buying the shares.) But I think I do have the outlines broadly right. If so, I think this ought to attract more attention than it does currently.
PS. Given that a change in ownership is absolutely fundamental to a company's future this is very obviously a significant stewardship issue. Yet, as I've blogged before, a number of the funds active in the merger arbitrage market do not adhere to the Stewardship Code.
Posted by Tom Powdrill at 13:05 No comments:

One of the things we've doing at work since the pandemic hit is looking at the spread of Covid in the workplace, in particular in food processing. My colleague Alice Martin wrote a really good research note on the sector which we published back in September and we're continuing to engage with companies. Earlier this month our research was mentioned in parliament by Labour's shadow minister for food Daniel Zeichner MP.

It struck us early in the year that there was a problem in the sector and our discussions with unions both suggested some particular cases of concern, and alerted us to potential unreported fatalities. To put the latter point another way, unions were aware of Covid deaths in the sector that companies had not disclosed publicly (at least at that point). In addition, by doing a big of digging into various info sources we were able to compare this with prior safety concerns in the sector, which added quite a bit to our understanding.

By late spring/early summer it was clear that food processing in general and meat processing in particular were Covid hotspots and outbreaks were reported at sites all over the world. Notably some research issued by the European Centre for Disease Prevention and Control (ECDC) highlight that in terms of workplace Covid clusters, food packing and processing sites came third after long-term care facilities and hospitals. As of August the ECDC had found 153 clusters reported between March and July in the sector (compared to 591 in care, 241 in hospitals) involving 3,865 cases. 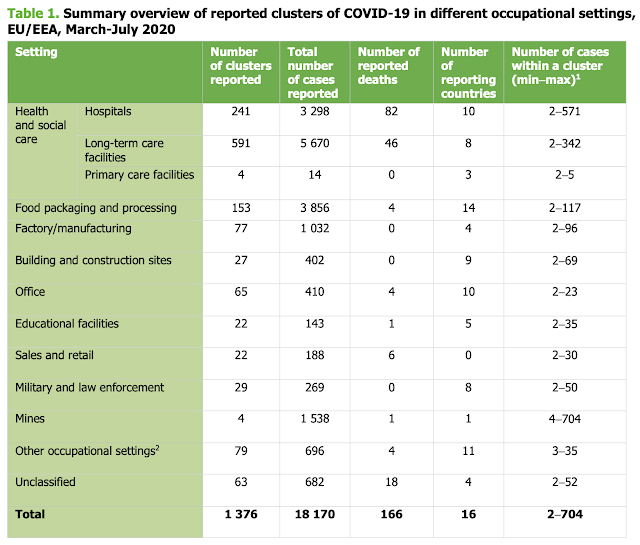 When we reviewed media reports in the UK, we were able to identify almost 1,500 cases and six fatalities. But these cases were not largely being officially reported as workplace infections. When we looked at RIDDOR reporting of Covid cases in the UK up to early August there were no fatalities and only 47 (forty-seven) cases across the whole country. Since we started highlighting this there seems to have been an uptick in cases, as of today (23 November) one fatality has been reported and 153 non-fatal cases.

Still, that's a lot less than the numbers of cases reported in the media. To take one example, 250 cases were reported at a single site in Watton in Norfolk. This one is particularly interesting as the rate of infections in Norfolk as a whole has been very low - it was about 25 cases per 100,000 people in North Norfolk - whereas the rate in Watton became the highest in country, at 1,515 per 100,000. This is important because companies have often said that cases identified at work may not have arisen at work, with shared accommodation and travel often highlighted as important factors. This may or may not be true, and we might also question if these factors are themselves created by employment model.

The fact that food processing is a Covid hotspot is also feeding into public policy decisions. Perhaps not surprisingly, the government has identified workers in food processing as a priority for testing (something also called for Labour politicians in Norfolk), and today I discovered that industry associations are also calling for them to be a priority for vaccination.

Something doesn't quite add up here. If the risk in the sector is high enough that we need to test and vaccinate the workforce ahead of others, and the cases keep piling up, it's hard to accept that the workplace isn't a signifiant site of transmission, and the RIDDOR figures look far too low. Notably the HSE itself has said there could be significant under-reporting.

In any case, if you are interested in the S in ESG, and worker safety during the pandemic in particular, I'd urge you to have a look at the sector.

Posted by Tom Powdrill at 19:52 No comments: