Corporate control on the cheap revisited

A few months back I blogged about the role of hedge funds and banks during takeovers and the potential for the combination to have a significant impact on the outcome. Here I just want to add a little sprinkle of detail from the current situation facing G4S.

As things stand, G4S is the subject of two private equity-backed bids, one of which is supported by the incumbent management. Because neither bid has succeeded so far, it is now moving to an auction.

I've been tracking the derivate positions in G4S built up by hedge funds. Below is an up-to-date list of all the filings I've found. One caveat: I do not know whether any of these positions have been closed out, because I'm not up to speed with filing requirements, so the list below is of the latest disclosed position for each fund, but the starred ones a recent filings (eg Davidson Kempner has not issued a filing relating to G4S since 23 Dec, but PSquared issued one on 9 Feb). To save you the bother of adding them up, total disclosed positions add up to over 36%, recent ones to just under 26%. 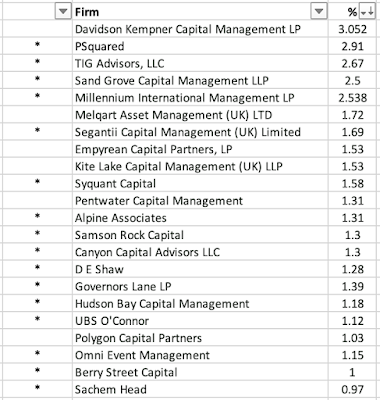 Either way it's significant and the total exposure is bigger than any of the other examples I've looked at, though of course there may be other bigger ones out there. Also the list of funds with exposure has steadily increased - Alpine, Omni and Berry Street all only started producing filings in the past week or two.

The flip side to this, as I've blogged before, is that banks end up holding a lot of stock as counterparties, and if you look at the list of major shareholders G4S discloses on its IR site currently 4 of the top 5 are banks, holding a total of 21.73%.

To simplify to the extent of a truism, this either matters or it doesn't. The banks hold the shares because the hedge funds want derivatives - I don't believe that hedge funds would want/be able to go out and buy a quarter to a third of shares in a target. The combined size of both equity and equity derivate positions is clearly significant, and would be enough to tip a bid one way or another. Why doesn't this get talked about?

Posted by Tom Powdrill at 13:49 No comments:

Getting Blackrock to do things...

Just a quick post. I increasingly find myself thinking that the focus amongst campaigners on trying to move the giant asset managers, and Blackrock in particular, represents a failure to think things through.

There are a number of overlapping aspects to this. First, trying to change the policies of a powerful economic actor without questioning how they got that power, and whether it is legitimate to exercise it, really lacks ambition. We be asking whether we should *allow* an (admittedly enormous) intermediary to exercise influence that derives from other people's deferred pay. Focusing on getting Blackrock to do things is likely trying to change the approach of an unelected political leadership rather than seeking to replace them.

Second, it also serves to reinforce the shareholder primacy model at exactly the time when it is being questioned. Put another way, it seems a bit incongruous to try an enact a multi-stakeholder model of the corporation through the exercise of power by the only stakeholder currently recognised in law. We can't create a new model through the institutions that dominate the current one, something else is required.

Third, as someone who focused primarily on labour issues, I am concerned at the way that investors that go quite a long way on environmental ones - while concurrently voting against the most basic asks relating to worker voice - get treated as 'progressive' forces. I can imagine Blackrock et al getting better on climate, supporting more diverse boards etc and advocating the sort of agenda that corporate liberals are comfortable with starting to get plaudits, even as they fail to act on workplace issues.

* Actually should probably also include the risk of anti-competitive practices.

Posted by Tom Powdrill at 21:56 No comments: