How seriously do hedge funds take the Stewardship Code?

Just stumbled on this. Try Googling "generally supports the objectives that underlie the Code" and "consistent approach". Someone somewhere drafted this text... 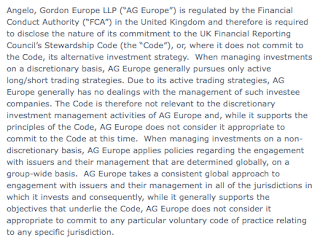 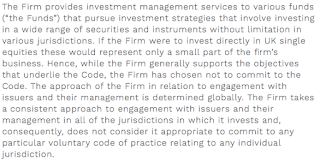 Posted by Tom Powdrill at 21:09 No comments:

Shorting Carillion and funding the Tories at the same time

Posted by Tom Powdrill at 20:45 No comments:

“[D]iversified shareholders who are uninvolved in and ignorant of a company’s day-to-day business decisions are in no position to police against, or even know about, antisocial corporate behavior… And when disaster strikes, uninvolved shareholders are unlikely to feel personally responsible. How many BP shareholders felt responsible for the Deepwater Horizon disaster.”

The Shareholder Value Myth, Lynn Stout
Posted by Tom Powdrill at 22:28 No comments:

Asset managers shorting their own clients

Hat-tip to the smart people in Labour's shadow DWP team who have spotted that whilst Blackrock was shorting Carillion it was also managing money for Carillion's DC scheme.

Inspired by that, I went and had a look at a few other companies on the FCA list of short positions, and what do you know.... I found four (update: five) other interesting examples. What is below is based on a) the FCA data and b) the most up too date pension docs I could find on a quick trawl. There might be more out there. Anyway...

Blackrock Investment Management UK was shorting AA Plc as at 28th Dec 2017. Blackrock was listed as a asset manager for the AA pension scheme in its 2017 annual report. 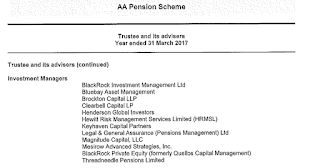 Blackrock Investment Management UK was shorting Babcock Plc as at 16th Jan 2018. Blackrock was listed as an asset manager for the Babcock Plc pension scheme in its 2016 annual report. 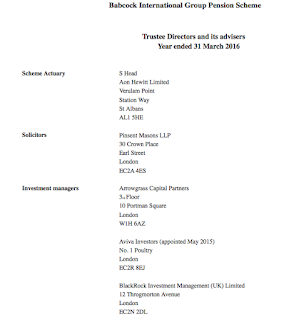 Blackrock Investment Management UK was shorting Kingfisher as at 24th Nov 2017. Blackrock took over benefits transferred out of the wound up Kingfisher Retirement Trust.

Blackrock Investment Management UK was shorting Pearson Plc as at 18th Jan 2018. Blackrock was listed as an asset manager for the Pearson DC schemes in its 2017 annual report. (Full disclosure: I'm a member of a Pearson DC scheme!) 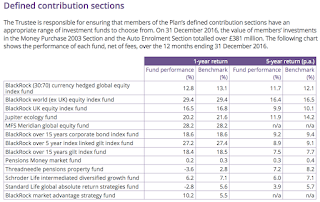 This is is just on a pretty quick skim looking only at Blackrock Investment Management UK, and only at currently disclosed positions. I'll have a look at other managers and historical data when I get a bit of time.

Needless to say, it's not illegal or anything for Blackrock to both run pension fund money for a company and short the sponsor at the same time. It's also surely the case that the decision to short is taken by a completely separate part of the business to that responsible for these schemes - there ought to be chinese walls in place.

But let's be honest, the optics aren't great are they?

A different bit of Blackrock, with a short position on Serco as at 5th Jan 2018. Blackrock was awarded a £1.5bn LDI mandate by Serco's trustees last July. 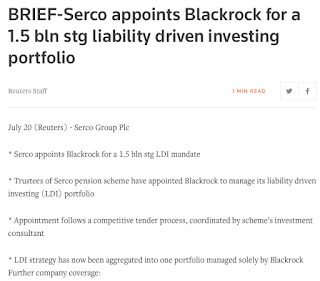 All stakeholder interests align over the long term, not

This was about a month before Ryanair agreed to recognise unions:


“Frankly, most of the shareholders would rather Ryanair doesn’t fly any planes for six months than the workforce becomes unionized,” said Barry Norris, who oversees about $500 million at Argonaut Partners in London, including Ryanair shares.

Posted by Tom Powdrill at 19:31 No comments:

Today is Fat Cat Day, the day on which the High Pay Centre calculates that the average FTSE100 CEO has "earned" as much as someone on average earnings gets in a year.

As we're focused on exec pay, I thought I'd contribute an update to a blog I wrote previously about the solemn and respectful tone that Ladbrokes has adopted in response to high shareholder votes against it over executive pay. We cannot fault Ladbrokes on its commitment to listen seriously to shareholder concerns... at the last three AGMs.

In 2017, in response to a large vote against its executive pay arrangements, Ladbrokes noted respectfully that:


more than 20% of votes cast were against the Directors' Remuneration report and have been advised by some shareholders that this vote against was in respect of the salary increase of Jim Mullen, the Chief Executive Officer, at the time of the merger with Gala Coral, which was undertaken to bring his salary in ratio to the salaries of other executives joining the Board as a result of the merger. This was widely briefed to major shareholders ahead of the increase, with only one major shareholder expressing concern and that was about phasing of the award rather than quantum. Jim Mullen has not received an increase in his salary in the current year. The Chairman and the Chair of the Remuneration Committee will seek to meet with any significant shareholders who voted against the report to further identify any other issues that arose.

This was of course a one-off, and should not be seen as indicative of a systemic problem with executive at this company or more widely. Plus points too for willingness to engage with shareholders.

And we should take the same view of its 2016 AGM, when, in response to a large vote against its executive pay arrangements, showing the greatest respect, Ladbrokes stated:


The Board notes the vote in respect of the Directors 'Remuneration Report. Ladbrokes understands the concerns expressed by some shareholders towards the termination arrangement with Ian Bull.  The Board is very aware of shareholder observations and these will play a key part in the Board's thinking as remuneration is considered for the business going forward and the potential merger with Coral.

This was also a (different kind of) one-off, and, once again the commitment to take "shareholder observations" into account was very welcome.

Certainly, no link should be drawn between the 2017 and 2016 AGMs and the 2015 AGM, when, in response to a large vote against its executive pay arrangements, with a respectful tone, Ladbrokes said:


The Board notes the vote in respect of the Directors Remuneration Report. Ladbrokes has spoken with several shareholders about the termination arrangements for Richard Glynn where his contract required that any settlement had to be determined in line with UK damages principles.  The Remuneration Committee confirms that contracts of this type are not appropriate and termination arrangements for the current executive team, including Jim Mullen who was appointed CEO on 1 April 2015, are determined on payment in lieu of notice (PILON) principles in line with best practice.  The Remuneration Committee further notes that Jim Mullen was appointed on a lower salary and shorter notice period than the previous CEO.

I think we can all agree, that what matters here is not getting three large shareholder protest votes in a row, or managing to irritate investors in three different ways, or that shareholder let them get away with it, and certainly not the scale of the pay! But rather we should applaud the respectful and non-inflammatory tone adopted by the company, and its commitment to engage with shareholders. It is a shining example of the consensual and non-confrontational nature of UK corporate governance working at its best. A pat on the back to all those who made this happen!
Posted by Tom Powdrill at 07:43 No comments: