The costs of loyalty

I've blogged a couple of times previously about the peculiar messaging around consumer 'loyalty'. The repeated used of the phrase 'loyalty penalty', and the message that 'loyalty doesn't pay' from both consumer groups and regulators feels very odd to me.

As I've said before I think loyalty - which I take to mean a long-term co-operative relationship - is a deeply-rooted human trait. Therefore attacking it is unlikely to lead to humans to conclude that being loyal is a failing on their part, but rather will simply engender mistrust.

On this topic, I was really interested to see this paper last week, which is part of the CMA's response to a 'super complaint' from Citizens Advice. I've properly read about half of it and skimmed the rest (just being honest!) and it's well worth a read. The 'loyalty penalty' in a nutshell is the cost to the consumer of sticking with the same provider (for energy, insurance etc) rather than switching. This is essentially a price differential between new and existing customers, with the latter getting stung with higher costs (so their loyalty is penalised). As the paper sets out, this cost might be through 'price jumps', when low initial rates reset, 'price walking', where the provider increases costs in steps over time, or because of legacy contract, like when you're stuck on an old tariff.

Anyway, it's a big enough problem that it has its own name, and this paper looks at academic literature on how and why this comes about and what remedies might be applied. There are loads of interesting aspects to it. For example, early on it is made clear that the approach does not consider 'fairness' - whether it's acceptable in principle to charge different customers different amounts for the same product.

On the other hand, regulators are concerned about whether vulnerable customers (the elderly, low income households, the less educated etc) are particularly at risk. And they are. Here's a key section (had to screenshot due to weird formatting): 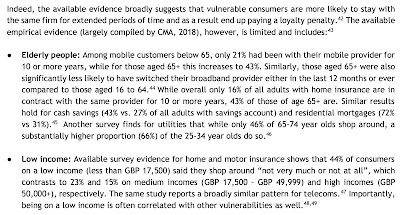 And a useful table on switching (or the lack of it) in respect of energy provider. 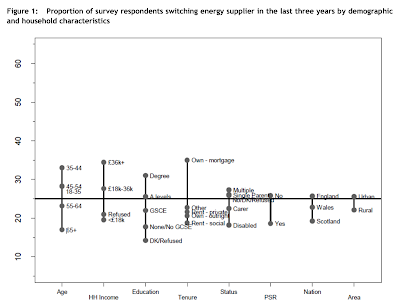 I feel like there is an ESG point in here. In a number of markets there are providers that are publicly listed. Are returns to shareholders being juiced by taking advantage of vulnerable customers? That might seem a bit of a stretch, but look what happened to the share price of Dignity when the CMA backed off price controls in the funeral service market (which had been considered because of concerns that grieving families were being ripped off).

Another thought from reading this is that providers are constantly recalibrating their offer, and responding to changed regulatory environments. In an era of big data, these changes are often happening very quickly. I imagine provider algorithms battling it out with price comparison site algorithms. (Ironically one of the price comparison sites - which are supposed to be on the punters's side and aid competition - was fined for breaching competition law in a way that the CMA was likely to lead to higher premiums.) It doesn't feel like a fair fight between the ordinary punter and the providers.

In such an environment, sending out a message that you will get shafted if you don't shop around regularly - which is the tone of much of the 'loyalty penalty' messaging - doesn't strike me as a genius move. Consumers may simply become fatalistic about getting ripped off wherever they take their business, so switching might seem like a waste of time, rather than a smart response.

Something that really comes across for me is how much effort regulators are putting into trying to get markets, and market participants, to behave like they are supposed to. Here's another little snippet

This idea of trying to get market participants to behave more like theoretical expectations reminds me of the genesis of the Stewardship Code. Again, if it's in investors' interests to be effective 'stewards' of assets they own, why don't they just do it? Why do they need regulators to encourage them? That's another story, but it does make me wonder how many markets are like this. Combined with the 'unfair fight' I wonder if markets that are a long way from theory can ever be expected to change.

And just as I was thinking about this, I stumbled across this comment. Basically what's the point of consumer choice in energy markets if most punters can't/don't want to exercise it, and if regulators might make better choices for them?

The fact that this is in a report commissioned by the Competition and Markets Authority is a bit interesting to put it mildly.

Anyway, worth a read.

Posted by Tom Powdrill at 22:36 No comments: