I blogged last year that I thought the position of shareholders relative to other stakeholders was going to come into sharper focus in politics. Here's a piece from my favourite newspaper this weekend to make the point: 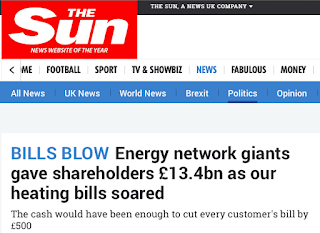 This sort of positioning is no longer restricted to utilities. For example, look at the way the story in the Guardian about dividends paid in Q1 is framed - the payment of dividends is counterposed with wages.

Something's up.
Posted by Tom Powdrill at 14:40 No comments:

Talking to my family about politics

Easter is one of those special times of the year when we get to spend time with family members we don't see often enough... and to be deeply shocked at how differently even close relatives view the world.

I'm a fully paid-up metropolitan lefty Remainer. Most of my family are not. None of my immediate family live in cities, and several of them voted Leave. My Stepdad, who voted Remain, doesn't want a second vote (because we've voted already) and says he'd vote to Leave now if there was one because he's sick of it all. My mum, who is a floating voter, has torn up her polling card because she thinks all the parties are useless. They both argue that failing to carry out Brexit means democracy is undermined.

These are genuinely and deeply-held views. My family aren't bad people and, much as we've argued about Brexit a lot, I'm not going to fall out with them. So I try to listen to why they feel the way they do even if I don't agree.

One theme that repeatedly comes up is the loss of sovereignty. This is an issue that a lot of Leavers raise, but which people on my side don't really engage with. Somehow, although we all know that there is a decent point in there, the idea remains too abstract ("tell me which laws you're talking about"!) for us to bother with. Because it seems to be a vague idea, rather than something that can be evidenced (and thus rebutted with well-evidenced bullet points...) it's not worth the effort to take seriously.

This makes me think more generally about the way we engage (or fail to) with people who have different views when we're trying to make change. It's hardly a novel insight that we seem to be in an age when there is a stronger impulse to attack and/or deride people with different views. But, especially in light of Brexit, seeing as we don't seem to be able to reach even a temporary 'settlement' that would enable us to move forward, it feels like putting a bit more effort into listening might be worthwhile.

Because there are areas where there does seem to be quite a bit of agreement. Just trawling online this morning I came across several pieces about panicky corporate leaders (in the UK, US, and Australia) worried about the future of capitalism. Talking to my family members is instructive here. On issues like corporate tax avoidance or executive pay there is barely any difference between us. My mum thinks there should be a maximum wage!

I'm reluctant to fall for the comforting belief that Brexit, Trump etc are "really" about concerns about capitalism, but there is something going on here. I know he's not everyone's cup of tea, and I don't share his politics, but Jonathan Haidt's work on moral foundations theory keeps popping up in my mind. Issues like executive pay and tax avoidance seem to fall most obviously under the Fairness/Proportionality heading, but I wonder if it might also register under Authority/Respect and Loyalty/In group.

Thinking about tax avoidance, corporates that do this are obviously going to be seen by many as behaving unfairly, but are they also seen by some as failing to respect authority, and being disloyal to countries where they operate ("you make profits here, but don't pay tax here")? The more I think about this, the more I think there is quite a powerful brew here, which may explain why some "anti-business" views are held across quite a wide spectrum of the population. Polling around the 2015 election found UKIP voters holding some quite 'Left' economic views.

To it bring it right back to Brexit, it also raises a big question mark over the tactics of corporates issuing warnings (or threats) during and after the referendum that they might relocate jobs. Are Leavers who see jobs leave the UK going to conclude that the problem is Brexit, or that corporates have no loyalty to the UK, and no respect for its democratic decision to leave the EU? Are they going to think relocation of jobs is "fair" or "just"? I really doubt it somehow. If anything I can imagine it turbo-charging sceptical/negative views about capitalism.

Anyway, back to the easter eggs...
Posted by Tom Powdrill at 08:14 No comments: