Following on from Kier Group (and Carillion, of course) it looks like Interserve is facing some serious financial pressure. According to the FT there are "rescue" talks underway that involve a debt for equity swap that would largely wipe out existing shareholders. It is also suggested that subsequently the company would attempt a rights issue (if I'm reading it right). I can't imagine that would be a popular one, and there is an anonymous quite from a banker suggesting as much.

Anyhow, I thought I'd take a look at the short positions. Bear in mind that this is only capturing shorts disclosed by the UK regulator that are above 0.5% (you can get better/more extensive data from from IHS Markit but I don't have access to it). The 0.5%+ positions currently stand at 5.69% for Interserve - actually down a bit from last week. Here's a screenshot from Shorttracker (which just captures the FCA data) that shows the historical trend.

The share price didn't do much today buy has nearly halved in the past month and is down roughly 80% this year. Given that the FT story has just broken there might be some action on Monday. 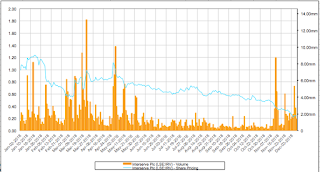 Also had a quick look at Kier Group. Its share have more than halved over the past month, mostly of the loss in response to the emergency rights issue. The short position is also down, from about 14% to 12%.

Again, remember that actual total shorts will inevitably likely be higher (presumably there are some out there between 0% and 0.5%). Dunno if the slight downward trend means anything or not. Maybe some shorts feel they've made their money? Maybe some stock lenders want their shares back?

Anyway, will keep an eye on both
Posted by Tom Powdrill at 22:48