Where are the workers?

The LSE has produced guidance on company reporting on environmental, social and governance (ESG) issues. So I searched it for references to various issues. Guess what? Like most RI/ESG initiatives, labour issues get very little attention. 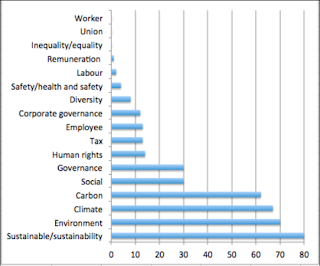 Posted by Tom Powdrill at 17:16 No comments:

I've blogged a bit recently about what appears to be a significant shift in thinking about corporate governance. There are signs all over the place that faith in shareholder primacy is faltering. There have been plenty of think pieces on this subject over the past few years, so I just want to highlight two recent voices from within the system. The first is Guy Jubb, who used to be the corp gov head honcho at Standard Life. His written submission to the BEIS committee inquiry makes a number of interesting points. On Section 172 of the Companies Act he says:

This duty, which is derived from the nebulous concept of enlightened shareholder value, lacks grit, is unduly focussed on shareholders and fails to provide an effective basis for legal accountability.

And on shareholder engagement he says:


Shareholders, in general, and institutional investors, in particular, should be efficient and reliable agents for accountability and change when boards and directors are failing to fulfil their responsibilities but often they are not. Policymakers and regulators, including the FRC, should re-calibrate their assumptions to recognise the limitations of investor stewardship. They should harness its potential in order to develop a new and realistic framework of corporate accountability and shareholder engagement. The interests of the public and of the shareholders are not being served effectively by the status quo.

The whole thing is worth a read, but the thing to bear in mind is that these views come from someone who has a lot of experience engaging with companies as part of a major institutional investor.

The second person worth listening to is Chris Hodge, who was the person in charge of the UK Corporate Governance Code at the FRC for many years. His recent essay has a lot of interesting things to say about what we can, and cannot expect, from corporate governance. He is sceptical that corporate governance can bear the weight of growing public policy expectations. He makes the point (which I bang on about regularly!) that policymakers - and, I would add, those seeking to influence public policy - are too quick to reach for greater reporting/disclosure as a solution to a given problem.

There are a couple of particularly good points that I strongly agree with. The first is about conflating shareholder interests with those of the public:

It may be tempting to believe that shareholder interest can be a proxy for public interest.
In 1992 – when 70% of shares were owned by UK pension funds, insurance companies and individuals – that might even have seemed plausible. Yet looking at the ownership base today, with over 50% of shares owned by overseas investors, it would be illogical to do so. Why should we expect the citizens of Norway or the retired teachers of California, for example, to feel they have a responsibility to look after the best interests of UK society?
While shareholder interest and public interest – or the interest of one or another group of stakeholders – may often coincide, that will not always be the case. Indeed, one of the charges laid in the current debate about directors’ duties under Section 172 of the Companies Act 2006 is that some boards have given too much weight to the interests of their shareholders at the expense of the interests of other stakeholders. If those stakeholders do not have the ability to represent meaningfully their own interests, the answer is not to ask shareholders to do so on their behalf.

The second is about that old chestnut executive pay:

It is over 20 years since the Greenbury report first recommended that companies report to their shareholders on this issue, and since that time the reporting and voting regimes have been regularly strengthened and, it seems, may be about to be strengthened further.
This regulatory approach has arguably benefitted shareholders by enabling them to put pressure on companies to align pay with performance, and may therefore be worth preserving for those reasons.
But in over twenty years it has done nothing to slow the increase of executive pay – some would argue it has contributed to it – or to reduce income inequality. There is no evidence to support the view that those objectives can now be achieved by adding more reporting requirements and voting rights.

Again the whole thing is worth a read, and again his views are worth taking seriously given where he has seen the world from.

There are two key points I would draw from all this for people on the Left. First, recognise that the fundamentals of corporate governance are highly contestable, especially at the moment, and don't simply play within the existent system. It certainly isn't as simple as empowering shareholders being inherently good. As we've seen in the debate about worker representation on boards, big shareholders will do us over on public policy when they think our interests and theirs do not align. On exec pay, we should be clear-eyed that focusing on shareholders simply isn't going to tackle the pay gap, as Chris Hodge says. We will need different tools.

Second, we need to shape the model that comes next. The corp gov establishment moved very quickly to try and squash the idea of workers on boards. However that is far from a lost cause, it's really just the first skirmish, and there is also a recognition that things need to change. My gut feeling is that "common sense" in mainstream corp gov will settle around ideas like reformulating directors' duties and creating new regulatory powers to tackle companies. It looks like the FRC already sees the way the wind in blowing, and is seeking to position itself as a more interventionist body. These aren't inherently bad ideas but regulatory oversight might not be massively more beneficial to workers than the current model if there isn't an effort to shape it. The Left should be ambitious and get in early so that the voice of the people that work in companies doesn't get excluded from the new model too.
Posted by Tom Powdrill at 17:05 No comments:

Is this what asset managers really think about executive pay?

There was a fascinating piece in The Times a couple of days ago about asset managers threatening to get tough on executive pay. You know, the news story that now appears before every AGM season, quite often accompanied by claims this could be the "stormiest" AGM season yet.

Sorry if I sound jaded, but I have heard "crackdowns" on executive pay by shareholders being threatened pretty regularly since about 2002 and the results have been pretty unimpressive. I don't think there has been a single year when less than 98% of All-Share companies have had remuneration arrangements approved.

What struck me about the piece in The Times is that attitudes may not even have changed that much. The whole thrust of the article is that asset managers need to be seen to act because if they don't government will do.

It's a "pre-emptive strike" by asset managers who are "Fearful of a tide of new corporate governance regulation". The asset managers agreed (without consulting any of us) that Government intervention *would* (not could) destroy shareholder value. And one manager states: “The last thing we want is government intervention as it could prevent British companies from attracting global talent.”

What I don't see anywhere in the piece is the sense that high pay for executives is a problem. Rather, government sticking its nose in is the problem, and therefore asset managers need to work together to create the impression of action in order to forestall any government intervention.

The cynicism and other worldliness on display here is pretty staggering. These people really don't seem to think there is a problem, and will use the power they derive from our savings to avoid public policy interventions.

I've said it before, but giving the people who are least concerned about the scale of executive pay the primary role in overseeing it is a questionable strategy, to put it mildly. The attitude on display in this article makes this argument far more effectively than I could. And we should say thank you to whoever briefed this line to The Times. I think they are idiotic for saying these things in public, but they have provided us with invaluable insight into how asset managers may really view the issue of executive pay.
Posted by Tom Powdrill at 06:03 No comments: