It's not surprising, given the market turmoil, that the crisis at NMC Health has attracted less attention than it would normally get, but it's shaping up to look pretty nasty. At the time of writing, the shares are suspended, the FCA has launched a formal enforcement investigation, the chief executive has gone (following several other directors) and the FD is on sick leave, the company has revealed off balance sheet financing running into hundreds of millions, the company is reported to have pledged future credit card payments from customers to obtain financing, there are reports of staff going unpaid and one analyst has warned that NMC shareholders might at the extreme be left with nothing.

It's pretty amazing that this has happened at a FTSE100, and this is something to bear in mind next time the claims is made that the UK's governance regime is the envy of the world. All this must surely require a thorough review.

First up, let's be clear this is not a UK company in a meaningful sense. Its shares trade here but the bulk of the business is elsewhere. Why are companies like this listed, and allowed to be listed, in the UK in the first place? Surely this example should lead us to look again at the listing rules?

Secondly, it's another controlled company, with a free float of only about 45% (though exactly who had the beneficial ownership the 55%+ is still a little unclear). [actually it looks to me like the free float was closer to 42%] Once again - why do we allow this, and if we are going to continue to do so why are shareholder protections so weak?

The NMC case really brings this home. The 'protection' is that votes on 'independent' non-executives have to be shown twice, once including the controlling shareholder votes, and once without. And in the latter case if the director gets less than 50% the election has to be re-run. OK, great, but key players at NMC were not caught by this. B R Shetty, the founder and vice-chair who is right in the middle of it all was (rightly, obviously) not designated independent. So the governance regime by design excludes him from accountability. Nor is this glaring flaw in the regime a new thing - think James Murdoch at Sky.

Thirdly, even if all that doesn't bother you, its board clearly had independence issues. Surely in the case of a controlled company like this you have to be extra vigilant, and you should use what limited power you have to push for a board that has strong independent representation. So why so little challenge from shareholders? Looking back at its last AGM the directors barely got a tickle, let alone a slapped wrist. If I was invested with an asset manager that had a big position in NMC and voted for everything at that AGM I'd give them a serious grilling.

We may need to need to look at reporting too. If NMC was unclear about who owned what it's possible that some of its RNS announcements are wonky. Having had a read through some of them I already have some questions.

UPDATE: Actually the point in italics below is easily explained. The disclosure requirements for a 'non-UK issuer' are actually less than for UK issuer. Excerpt from the FCA below. 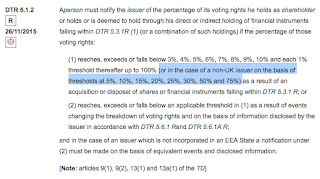 It's not obvious to me why there should be less transparency regarding the ownership of a non-UK issuer. It feels particularly odd in this case given that uncertainty regarding ownership of shares is right in the middle of the story.

Also I realise that NMC did not tick the box (literally) on the TR1 forms to identify it as a non-UK issuer. Maybe an oversight though.

Then there's nothing until January 2020, when this TR1 says that on 8 January Capital's position went to 11.5%:

It seems very unlikely to me that Capital held the same position for almost a whole year and then went from 5% to 11.5% in one day, given the size of the move, the limited free float etc. So what's going on there? And when I looked at a share register showing historical holdings in the company, it looks like they went over 5% earlier. I thought TR1s had to be issued each time a shareholder goes over a 1% threshold - am I missing something?

I appreciate that most market participants aren't going to rely on TR1s for holdings info, but these are regulatory announcements. Perhaps there is a reason why it didn't report ownership going over 6%, 7%, 8% etc, but if so the reporting regime seems a bit pointless. And it may not just be Capital, are there other TR1s that should have been issued?

This in turn makes me wonder about the disclosures in the annual report. Here is the list of major shareholders in the most recent annual report.

I thought that requirement to disclose major shareholders kicks in at ownership of 3%. If the company issued a TR1 in January 2019 saying that Capital went over 5%, and the statement of major shareholders in the annual report is as at 6 March 2019, why is Capital not in the list?

I'm going to keep digging away at this one, and will blog again as I find more out. At the moment I'm just shocked that this had happened.
Posted by Tom Powdrill at 11:29