What business are asset managers in?

Another issue I am starting to look at in more detail is the overlap between stock-lending, shorting and other activity. I was recently pointed in the direction of some of BlackRock's literature on stock-lending and it fed my sense that at least parts of its business are not necessarily all about asset management as we might typically understand it.

Here are a couple of excerpts: 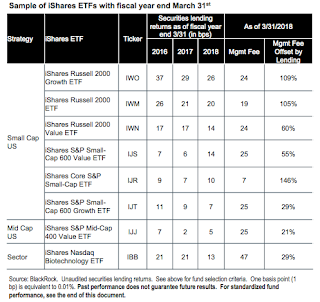 The first bit shows you how it works (in this case for Exchange Traded Funds). You deposit money with Blackrock in an ETF invested in a stock index. Blackrock lends some of the stock (for a fee, obvs) to an institution and uses the collateral provided in return to potentially get a return from a money market fund. Blackrock splits the income generated with you and offsets this against the management fee. In some cases the lending income you get is larger than the management fee.

What's Blackrock's cut of the lending income? About a quarter to a fifth according to the blurb:

(incidentally, Blackrock looks like it takes a bigger cut of lending income from European funds, but that's another story)

So if we assume that the 73.5% figure applies to the top 3 Russell 2000 ETFs in the list, then that suggests that the total lending income from these funds is 35bps, 27bps and 19bps respectively. That would make total lending income 40%+ higher than the management fee in the first two cases, and 21% lower in the third. If that 73.5% is correct then Blackrock's cut of the lending fee (26.5%) adds a reasonable chunk to their overall income.

There may even be a dribble more income for Blackrock as I assume that they would use their own money market fund to stick collateral in, so perhaps another management fee there?

If the actual level of stock-lending income in some of these cases is higher than value of managing the portfolio of assets, that suggests that there must be quite a lot of lending going on. Does it also suggest that the funds don't hold own the stock in the index they notionally track for prolonged periods? I don't know anything like enough to comment sensibly.

But what is quite obvious is that this looks like a nice business to be in. You take the clients' money to put in, say, a US smallcap ETF. You loan the stock out to someone who wants to borrow (for whatever reason) and take a decent cut from the income from renting assets bought with your clients' money. And you might even be able to make a few crumbs managing the collateral the lender gives you while the stock is out on loan.

Questions this raises for me are what is Blackrock really selling (and what are you really buying), and how does it see the business? It would be really interesting to see how much of the stock is out on loan at any time, because to me it looks a bit like in some cases Blackrock runs a stock-lending service facilitated by having an asset management offering. If the total income generated (though not Blackrock's cut) is higher from the former than the latter, how is it seen internally?

It's also important in the current context where asset management fees are in the spotlight. Based on the fees above, it looks like they are giving the asset management away for free for some ETFs - a very tempting offer. In reality they are actually earning more than the headline management fee, from two sources. And it only hangs together because the client provides the money to make it work and because lending is lucrative.

Some of this reminds me of the origins of asset management. Back in the 70s and even into the 80s, asset management was not a big deal in a lot of markets. Banks provided it as an add-on service alongside more profitable areas of work. Peter Stormonth Darling's book on the history of Mercury Asset Management is fascinating on the early history of that manager (which ultimately ended up as part of.... Blackrock). Warburgs were pretty much willing to give the business away to Flemings at the end of the 1970s, but couldn't. It was only when they realised that they could get away with charging a lot for the service that the industry really took off, and created what we see today.

Perhaps now that fees are (finally) under serious scrutiny we'll see more of this kind of activity as managers look to try to make money elsewhere to keep the fees they charge down. But as I say, it does raise some questions about what the business really is. And this is without even getting into the question of Blackrock's numerous short positions, and where the stock comes from for them.
Posted by Tom Powdrill at 21:17