Last year I blogged about the duplicate text that lots of hedge funds were using to "explain" their non-compliance with the Stewardship Code. It's still out there, and on a recent trawl I managed to find more examples of funds using the same blurb. But as no-one really seems to police this stuff on the regulatory side, it's just sitting there.

The other day when I was looking for ESG contacts at a couple of asset managers I don't know well I started looking through the Stewardship Code statements on the FRC's website. I noticed that I'd obviously hit one of these links (Loomis Sayles) on a previous trawl, but I also spotted that the manager is listed as both a Tier 1 and Tier 2 signatory (see below). 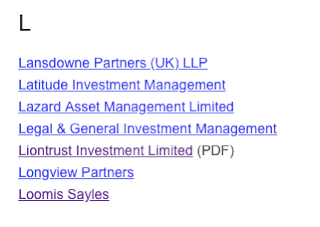 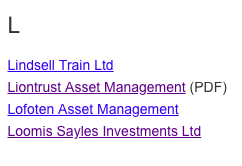 Actually, as you can see, both Loomis Sayles and Liontrust are listed in both Tier 2 and Tier 1. The link for the former lands in a slightly different place (which isn't actually a Stewardship Code statement) to the latter, though it's only a click away. In the case of Liontrust the links in both Tier 1 and Tier 2 go to the same document (it's the same URL I think).

And there's a third. Castlefield Investment Partners also appears in Tier 2 and Tier 1, though in the first case it's a dead link. 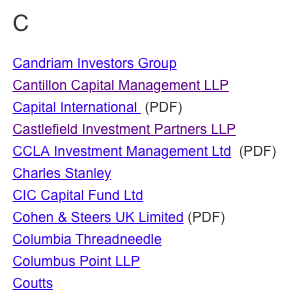 It's interesting that the Kingman Review (see below) was pretty sceptical about the impact of the Stewardship Code in practice and critical of the focus on policy statements. I'm not sure I completely agree overall, my own experience on the policy statement side is that there is some crap out there but no-one seems that fussed. 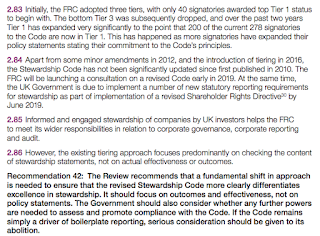