Again, huge caveat that the data in these charts is only 0.5%+ short positions, but some interesting stuff I think. At the end of play yesterday the FCA had disclosed 581 current short positions of 0.5% and above in UK shares. So I looked at which firms had the most shorts, and - of that group - what their average, median and largest short positions were. 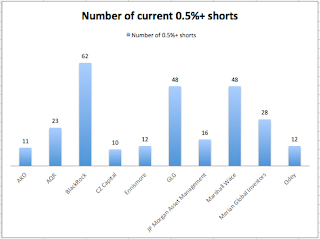 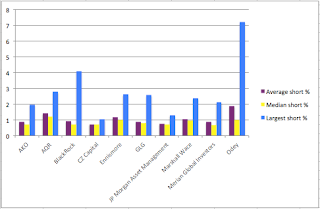 A rough (and pretty obvious) reading of this is that the hedge funds that make shorting a significant part of their strategy take a small number of bigger positions. I am surprised by the sheer number of Blackrock shorts (and there must be a lot more under 0.5%) which makes me wonder if a lot of this is hedging. Also quite surprised to see both JP Morgan Asset Management and Merian Global Investors (formerly Old Mutual) in the mix.

For info I had an arbitrary way of picking firms - just those with 10 or more shorts in the list.

PS - 20 largest shorts and the funds that have them: 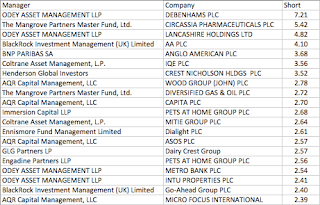