“He… told us we had to go straight to the Celtic Manor in Newport – 50 miles away – by five o’clock to sign the documents and British Coal executives would be flying down to meet us by helicopter. Even I could not believe this. They had won but they wanted us to suffer some more. When we got there, there were 15 senior British Coal executives in all their glory waiting for us. They told us to sign the documents and remember that it was us that voted to close the pit and not them…

“We got back in the car after only about ten minutes at the Celtic Manor and for the first time I started to cry uncontrollably. I’m sure you can imagine that if you are in a car with six miners and one of them starts crying, it really is the others’ worst nightmare. These are tough men and they are good men but they cannot handle a man crying. All they could do was pat my shoulder and say, ‘Ty it will be alright’, but I could not stop. I could not believe we were losing the colliery; even though my father had been killed at Tower, I loved the pit and the people there. I had spent most of my working life there. This was a dreadful day and I hated what they had done to us.”
Tower of Strength, Tyrone O’ Sullivan

“[A business like Facebook] cannot be easily pinned down, and the question where it is, for purposes of taxation, legal accountability and obedience to sovereign laws and policies may be decidable, but only by convention and without calling upon any basic loyalty of the firm. The arrival of Bitcoin and Blockchain may facilitate this mass escape from the grip of sovereign overlords, by making currency itself into a network of freely associating users, outside the control of any state.

“More and more businesses are built on this model, offering goods and services through networks that ignore national boundaries, coming to earth here and there like Amazon and Ikea, but only temporarily and only where the tax regime is favourable… [T]he the advantages provided by the Internet have given rise to a new kind of business, which owes obedience to no nation state…

“Economic activity has become detached from the building of communities. We do not know the people who produce our goods; we do not know under what conditions they work, what they believe in or what they hope for. We do not know the people who distribute those goods to us, except perhaps as celebrity CEOs – people who seem miraculously to escape all responsibility for their products, which are not their products anyway, but goods moving around the world under their own propulsion, on which they have managed in passing to stamp a brand. Local stores and local producers are successively bought up or driven out of business by anonymous chain. Any when a community tries to defend itself against the intruding giant it finds that all the cards are stacked against it, and that yet another anonymous agent, the abstract ‘consumer’, has already declared a preference for a shopping mall on the doorstep.”
Where We Are: The State of Britain Now, Roger Scruton 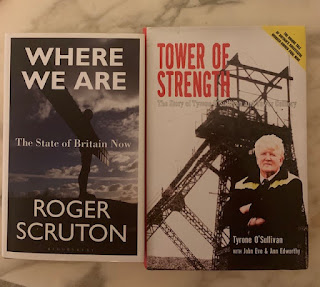 I've been reading an odd mixture of books recently. I'm making an effort to read some people on the Right to try and understand where they are coming from a bit more, hence the Roger Scruton snippets above. But I've usually got something finance and/or ownership-related on the go too. Recently I picked up a secondhand copy of Tower of Strength (thanks for the The Mission gags on Twitter already, Duncan and Andy!) which is about the worker buyout of the Tower Colliery in the 1990s.

There's an interesting overlap in all this. I've blogged a bit before about loyalty (and I keep meaning to write more about it) and it really comes across in these books. Scruton's book is basically about how Britons might pull together post-Brexit, and it is a open attempt to try and find some common ground. As you might expect, I struggle to connect with some of it, but the section on globalisation, from which the snippets above are taken, really interests me in a couple of ways.

Firstly, if you did not know the identity of the writer I think many people might assume they came from the Left, rather than the Right. I think that many/most people on the Left would agree with the tone of it, and there's quite a bit more in a similar vein in that chapter. The notion of modern companies as footloose, almost ethereal entities which can use legal trickery to make profits move from one location to another is a familiar complaint. As is their lack of commitment to any particular region or nation. I could imagine almost exactly the same words being written by Wolfgang Streeck.

Secondly, some of the language is very interesting. I'm particularly struck by the use of the word 'obedience' in a couple of places. The implicit notion seems to be that firms ought to be accountable, at least to the nation or its its government, but no longer are. 'Obedience' is a word that I imagine leaves many people on the Left feeling a little queasy, since it suggests deference to authority. But it's a very powerful idea on the Right, and it plays into Jonathan Haidt's stuff on moral foundations.

Flipping to the Tyrone O'Sullivan book there are some commonalities and some differences. A big difference is that in the passage above 'obedience' - being made to sign the forms shutting the pit - looks very negative. O'Sullivan is a 100% militant NUM guy, his whole history is about workers' self-determination, through the union and then by buying the pit that they worked in. Obedience to those in authority is not an obvious part of his make-up.

At the same time the way he talks about the colliery is very emotional. He and his workmates have a love-hate relationship to it, in that it's where they had many bitter fights with the employer, but also experienced comradeship. It was their home for most of the week. So pretty much the worst thing you could do to them was make them put their names to agreeing to close the pit. And what about the executives - literally flying in, and using a bit of paper to end a way of life. It's almost designed to make Scruton's point.

The sense of a lack of loyalty, commitment or accountability on the part of companies and executives towards workers or communities or localities seems to link up some otherwise quite disparate groups.    There's a similar thread running through David Skelton's book that I blogged about last month. I suspect that some Conservatives see this as fertile political territory, and this may yet affect the decisions of this government. But that's an unfairly superficial take. Small c conservatives (in various parties) genuinely feel companies are not behaving in an honourable way.

My sense is that there is still a quite a lot of room for manoeuvre for those that want to try and make companies more accountable. I could imagine quite a radical conservative take on all this that could encompass ownership, taxation, directors' duties etc. It might look quite 'Left' but argued from the 'Right' - in terms of obedience to national law, loyalty to people and place, fairness in relation to paying taxes, and so on. It feels like a potentially powerful mix.

To finish on the same theme here's an excerpt (from a novel) that I've always liked.

“In the old days, if a factory owner sweated his workpeople, sooner or later, if things got bad enough they stoned his carriage or booed him in the street. If a farmer was a wicked employer they burnt his ricks. And if a landlord was cruel enough and oppressive enough, they could break his windows, or at any rate march up to his house and caterwaul outside his front door. They knew who the industrialist was, who the farmer was, who the landlord was. Those people had names and faces, and it was common knowledge where they lived… But this new tyranny is quite different. You don’t know where the head of the combine lives, even if you happen to know his name.”