A few months back I blogged some initial thoughts about the idea of loyalty. To recap, I find it jarring that various bodies increasingly try and encourage us to be disloyal. While I get that it's silly to be 'loyal' to a utility provider (or insert your own product/service provide), there's something about encouraging disloyalty that feels weird.

As I've blogged previously, if you look at moral foundations theory loyalty is one of the core pillars, though apparently it resonates a lot more with 'conservative' people (this obviously assumed you have confidence in any psychological research, which is a question for another day). So I am not at all sure that telling people that loyalty is stupid - basically what Which? and others say - is going to make them 'disloyal'. I think they will just become cynical about providers.

A piece by Jonathan Ford in the FT this week covers similar ground and adds a couple of points that are worth clocking. He notes that there is now even a term - the 'loyalty penalty' - for the way that providers screw over long-term customers by offering them poor deals (indeed this is language the CMA uses). He says the scale is vast - an estimated £4bn a year - and that the worst offenders are in concentrated/oligopolistic markets. Interestingly he also links it to the need to keep financial stakeholders onside, at the expense of others: 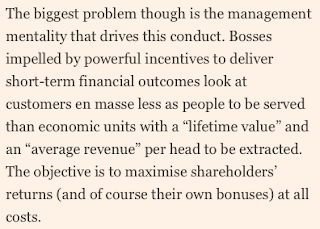 Whether you agree with that or not, it's hard to argue with the conclusion that the net result is further damage to the reputation of those businesses involved, and to belief that the market can sort it all out.

To circle back, this is why I find the "don't be loyal" messaging by the likes of Which? a bit odd. It feels like it's saying it's your own stupid fault if you trust providers, of course they are going to try and scalp you. And that the responsibility is on you to avoid getting ripped off, rather than on the provider to not to try and rip you off in the first place. And combine that with monopolies like utilities, where "shopping around" just means choosing a different logo on your bill. I have to choose between one of these firms, but I can't rely on them not to rip me off, so I should assume I will have to engage in a tactical battle of regularly switching with them to avoid it, even though the product I receive at the end is the same.

As I blogged last time, I don't believe that faced with all this people are going to think that it is their 'loyalty' that is a bad thing, I think they are going to conclude that the system is a swindle. Arguing for regular switching in terms of not being loyal is going to feed a sense of distrust. It's only going to increase support for radical intervention, be it tighter regulation or changes to the nature of ownership.
Posted by Tom Powdrill at 19:53