Just a bit of fun, but I've put together a few bits and pieces that put the vote on David Bonderman's re-election of chair of Ryanair in context.

To calculate the stats I've used the full AGM results distributed by the company, and stripped out Bonderman and O'Leary's holdings (about 51m shares)

First up, this is how the vote on his re-election stacks up against other chairs in the ISEQ20, based on the most recent numbers available (NB I couldn't find data for two of them). 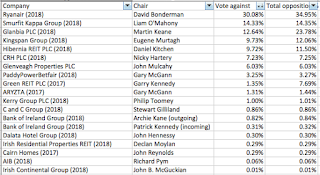 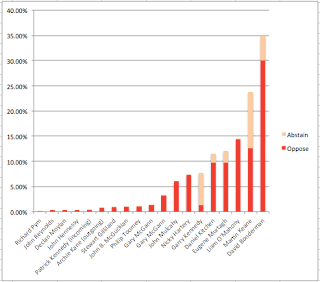 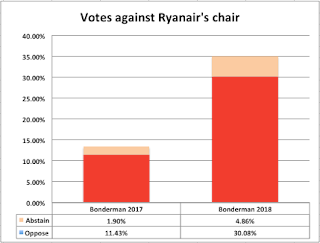 The final one looks at the split of votes cast and shares not voted (this one includes Bonderman and O'Leary's holdings). 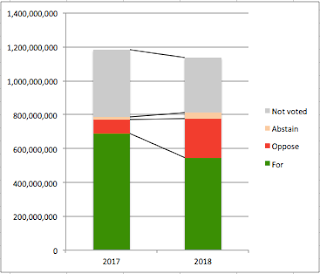 I am curious about this. Undoubtedly there was much more focus on this year's AGM, which might have nudged turnout up (and these votes could have gone any of the three ways), but there was also reference in the meeting to some shares being voted at the chair's discretion. It's possible Ryanair used these votes this time having not done so previously, though I have no way to stand this up. To be clear, an extra 5% wouldn't make much difference to the result, but means the non-insider vote might have been edging towards 60:40 in favour.

Final point: looking at this chart, Bonderman actually received the active support of less than half (48%) of the issued shares, compared to more than half (58%) last year.
Posted by Tom Powdrill at 10:18